...continued from LEJOG (End to End) Day 7 - Past Lochan na h-Achlaise and Glencoe


After finally being dragged away from Rannoch Moor and the views around Lochan na h-Achlaise we carried on up the valley (Glen Coe) towards the village of Glencoe.  Whilst it had been quite cool, it had been pretty sunny most of the time and we hadn’t seen rain since the Rainbow further back along the A82.  However, looking beyond the peaks when we road up past Loch Achtriochtan, the skies looked very ominous.  Once we’d got through this section of climbing there was going to be a lot of descending on the run in towards the Hotel.  This was generally a good thing, but a slight concern to Paul with his under-inflated tyre.

The run-in towards Glencoe was a great descent.  We were always able to get up plenty of speed with the extra weigh onboard from the panniers.  However, a bit like a lorry, you knew that stopping with the extra weight was going to be much harder.  This mean that whilst gravity was always pushing you down hill very fast, you had to be careful not to get too carried away.  I was a little braver than Paul, as I wasn’t nursing a back tyre with less than the desired pressure in it, so I sped off into the distance, enjoyed the ride and planned to wait for him somewhere in Glencoe.  By this time we were due another quick pit-stop and I was hoping we’d find some toilets.  It was mainly dry on the downhill, fortunately, but the rain was back with me as I waited for Paul in a car park near the toilets.  I managed to grab a bit of cover in a bus shelter.  We grabbed a bit of food from our panniers, relieved ourselves, planned the final part of the journey and got off on our way again.

More stunning views (below) - This time in Glen Coe 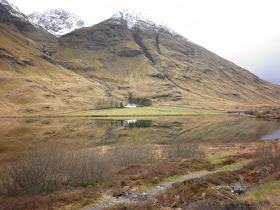 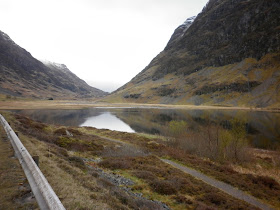 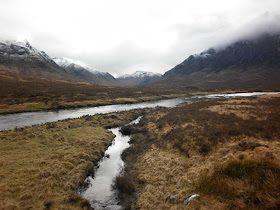 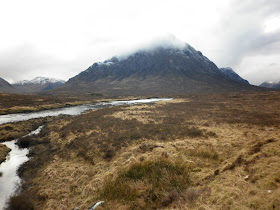 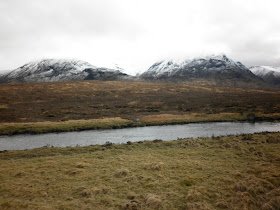 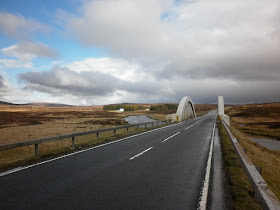 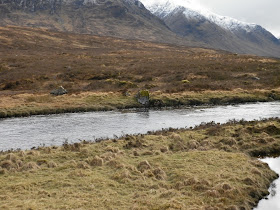 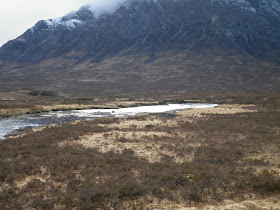 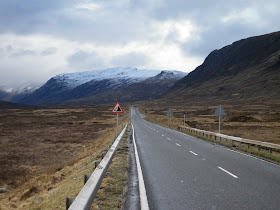 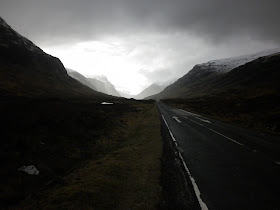 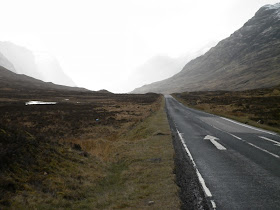 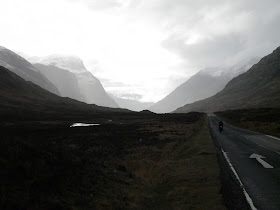 It wasn’t too long into the next section when the heavens opened.  The rain really came down.  This was the not the first time we’d seen rain on the journey today, but today was the first time we’d seen any rain since leaving Land’s End.  I suppose, statistically it was bound to come sooner or later.  We had been very lucky so far.  I was hoping it was going to be a shower (although heavy) and whilst we were now pretty soaked, we may get a dry bit before our arrival at the hotel.  With this in mind, I rode a little faster in the hope that there was maybe another bus shelter somewhere up the road.  Eventually I did find one and ducked into it for some cover from the elements.  I’d have to stay there some time to get dry, but it was an opportunity to give my eyes a rest and wring a few things out.  I saw Paul approach (only at the last minute) and he hadn’t spotted me.  He rode past and off into the distance.  It didn’t look like he was planning on stopping whatever the weather.   I mustered up the courage to get back out into it and to ride to catch him up.

I caught Paul up, and he was a little surprised that I’d approached on the road from behind.  I explained that I’d hopped off for some cover and he come flying past without seeing me.  He said now that we were wet, we may as well just carry on and try and get to the final destination of the day.  Whilst I was trying to dry off, I’d been able to get the smart phone out and check where we were on the road and how far away the hotel was.  I reckoned that we had between ten and fifteen miles to go, which wasn’t great in this rain.  However, the rain may never have passed and it wasn’t worth taking the chance and letting the nightfall approach.  We eventually found the Hotel (after a little confusion over which one it was) soaked through to the skin.  We were dripping wet.  We propped the bikes up outside reception, presuming that nobody else would want to be riding this sort of weather, and left them unattended as we went to check in.

The lady on the reception was very friendly and it turned out that she was from Bolton, which isn’t too far down the road from where we live.  It was a little bit embarrassing as we dripped the gallons of accumulated rainwater from our clothes onto the carpet.  It was also time to see if I could sort out the confusion on the booking from the night before near Glasgow.  They were fine about it and thought that the first one was a spoof booking by Mr. Preston from Preston (I’ve never heard that one before).  The receptionist explained how they’d been having a laugh about it earlier in the day.  That was a relief, my concerns about having to pay for the room twice were alleviated.  We asked about the options for dining, as we really didn’t fancy heading out again that day, got sorted out with a shed out back to park the bikes and were quickly off to the room to dry off.  On getting into the room we cranked the heating up knowing that we’d have a fair amount of drying to do.  We had spare gear, but not the outer layers and unfortunately we discovered that things inside our pannier bags were also wet.  Everything had to come out to get dry.  The things we needed to wear that evening were just about OK.

Nicely refreshed from the shower and finally feeling a bit drier, we head off to the other end of the Clan Macduff Hotel to dine, have a few beers and relax.  We opted for the burger and chips again.  Perhaps not as good as Mr. Wetherspoon’s, but not too bad.  We managed to do the social media check-ins from the hotel dining room and then it was pretty much time for bed after we’d refuelled.  We went back to the room, which was now like a sauna.  We had to open the window, even though it wasn’t too warm outside, just to get an atmosphere we could breath in comfortably, let alone sleep in.  There was stuff all over the room drying everywhere you looked.