This was probably my favourite day of the whole journey.  Other than meeting up with old friends or relatives, it pretty much had everything.  There was so much to see, and quite a bit happening, so I've split the day into two parts.  The scenery just North of Glasgow was truly stunning and this post has a lot more images than the previous LEJOG posts.

We awoke early expecting to be riding in wet conditions.  It was certainly damp and was a very dark morning generally.  However, It certainly wasn’t pouring down.  We prepared for a cooler, wetter day though.  We had the check-out process to go through, needed to decide how we were going to take breakfast and more importantly (for Paul’s sake) needed to figure out how to cross the River Clyde at low level.  Paul already had concerns about the prospects of a bridge crossing.  It was a little windy, but the winds weren’t high.  We entered into a debate our options with the very friendly and helpful staff at the Campanile.  We explained about our aversion to a bridge crossing, based on Paul’s acrophobia and there was a suggestion of us using a tunnel crossing, but that had doubts cast on it as people were unsure that we could cycle (or walk) through it.  Somebody suggested that there was a Clyde Ferry crossing not too far away.  This seemed like a good idea, appealed to Paul’s nautical side and added to the adventure of it all.  It was certainly a different way to get ourselves and the bikes over the water.

Ahead of that though, we had to get another meal in to fuel our day’s exertions.  The Hotel was offering us a continental style breakfast, but that didn’t tick the boxes as far as the necessary calorie consumption was concerned.  We embarked on the idea of a revisit to Wetherspoon’s, we’d been very impressed the night before and knew that they’d have a breakfast option at a very fair price.  We retrieved the bikes from the hotel office and got on our way.  It was a very short ride to breakfast.  Thinking about our health, we avoided the alcoholic options to start the day, but did again favour the oily, fried alternatives.  As we were in Scotland, we opted for the Scottish Breakfast.  I can’t remember the exact difference (between that and the English one), something to do a potato cake thing?

Suitably fed we headed off to the Ferry.  It wasn’t too far away and in exactly the same direction from the hotel as the breakfast stop.  This was a bonus, as it meant we didn’t need to turn back on ourselves.  The ferry wasn’t much, but I can’t remember the cost now and I don’t think we were issued a ticket.  The crossing took a fairly direct route and after only a few minutes we were on the North side of the Clyde and cycling again.  We followed a cycle route west until we made our way back onto the side streets and the road out of Glasgow.  We had a quick pit stop for supplies under the shadow of the Erskine Bridge on Dumbarton road.  Whilst I waited for Paul to do his shopping, I ponder what the bridge crossing would have been like and was glad we’d found the ferry option.  I watched a few buses and lorries cross the substantial viaduct, and they appeared like matchbox cars as they drove along the suspended platform.  I was happy to be a ground level looking up to it. 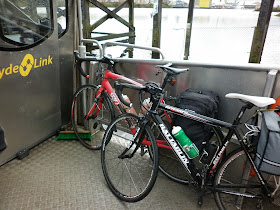 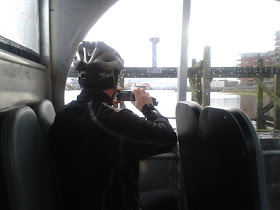 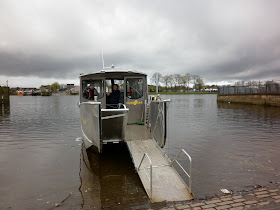 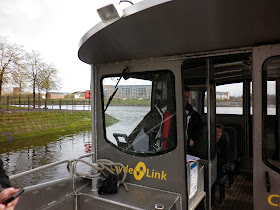 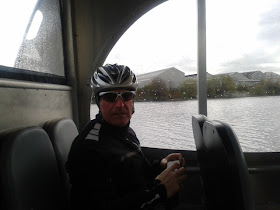 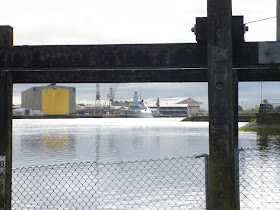 We were soon leaving Clydebank and heading along the A82, which going to be the road of choice for the rest of the day.  From that perspective navigation would be easy.  We just had to stick to this main road and follow the road signs.  The only negative would be that this is the main road up there, so there was going to be all of the traffic, heading in the same direction as us, passing us all day long.  There are no Motorways much North of Glasgow in this part of Scotland.  Having said that, it was surprising how soon we seemed to be leaving the conurbation and arriving in the countryside.  Anybody living and working in Glasgow wouldn’t need to travel far to get away from it all.  It’s pretty good where we (Paul and I) are in Lancashire with the West Pennine Moors, the Forest of Bowland and the Lake District all pretty much on our doorstep, but this was on another level.  Even though we were on a main road, the wilderness seemed to be all around us.  We soon reached the banks of Loch Lomond and stopped for refreshments and the usual Internet updates.  This often involved a quick check of the email.  I was slightly concerned as there seemed to be a thread about a hotel booking from Booking.com.

On further investigation, it appeared that the next hotel, near Fort William, believed we were checking in with them the night before.  Oh no!  I thought I’d been getting ahead of the game booking something the night before for the next day whilst in the pub.  I didn’t for a minute think the web site or our hosts would think I was attempting to get there that night from Glasgow, but I must not have checked the dates.  We’d already booked with Booking.com for (near) Glasgow, so how could we be another hundred miles up the road in thirty minutes?  I was booking the room at about 11:30 pm.  Anyway, I explained the problem to Paul, and suggested that I took some time at the next proper stop to sort things out.

On the next stretch of the A82 we had a minor blip, we had our second puncture.  Well, strictly speaking Paul had his second puncture.  I put it down to the extra weight and inferior tyres!  We stopped on the bridge over Fruin-Water, a River which fed into Loch Lomond.  Whilst Paul did his maintenance.  I was soft and ducked out the way to avoid a rain shower.  Paul’s pretty adept at swapping tubes and getting tyres back on, so we were soon on our way again.  The weather, whilst changeable was generally OK.  We’d been rained on a reasonable amount, but they were only fairly light showers and they didn’t last too long.  I’d been taking the “Brighter Than The Sun” rain jacket on and off for most of the day, but nothing to dampen the spirits.  We stopped for a bit to take photos around the Loch, stopping for photos was going to be the theme for the day.  It was incredible, practically everywhere you looked there was a wonderful vista. 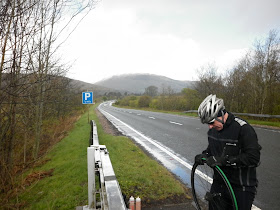 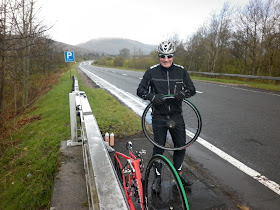 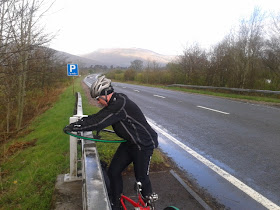 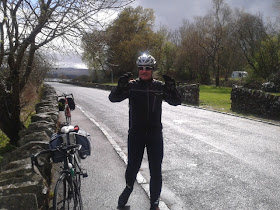 We stopped next at a café on the edge of Loch Lomond.  There was time for a toilet break and coffee and cake.  I suggested to Paul that he got moving and I spent a bit more time looking at the hotel room problem.  I came to the conclusion that if they were going to charge us for the missed booking that would’ve already happened.  I thought the best plan would be book the room again for tonight and try and explain what had happened the night before when we arrived.  It was easier to do these things face to face? 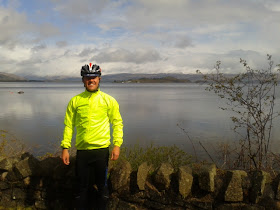 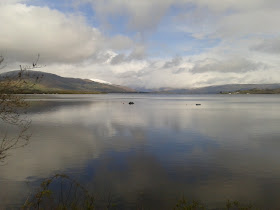 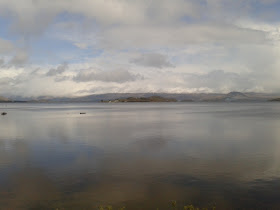 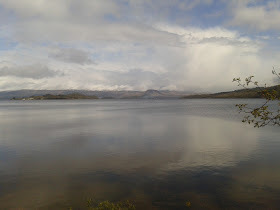 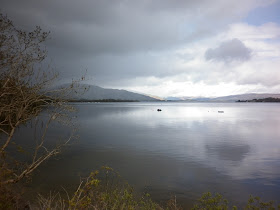 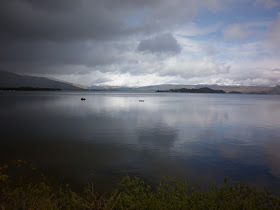 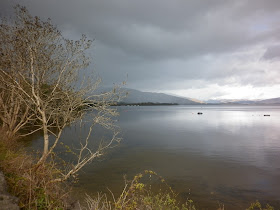 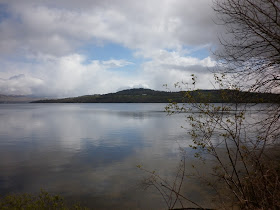 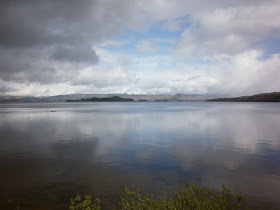 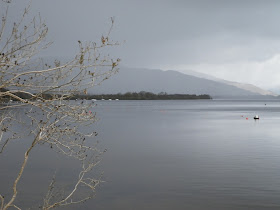 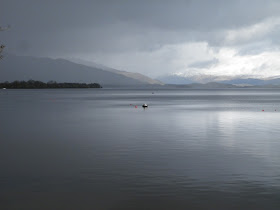 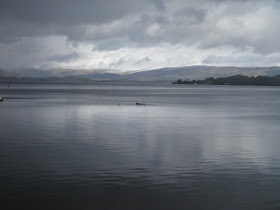 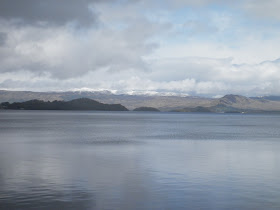 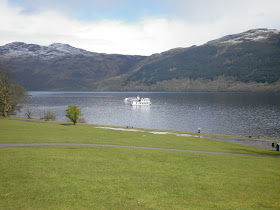 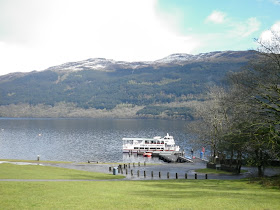 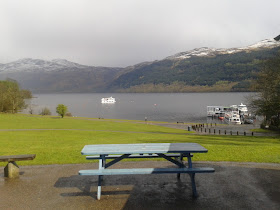 Whilst this day wasn’t really any more eventful than others, nor was it the longest ride that we did, there was so much to see and so much worth capturing on camera that I’ve split it into two parts.  The next instalment about our epic ride past Past Lochan na h-Achlaise and through Glencoe to the banks of Loch Linnhe can be read in the next instalment :