We awoke to another dry morning.  A little overcast and a bit cool, but not freezing and not wet, so almost ideal for the last leg.  Looking back and learning that April had been the wettest on record in the UK since records began made us feel even more lucky that we’d been relatively dry, other than a few hours at the end of the day twice.  We’d never needed to set out into heavy rain, which would have been totally demoralising and we’d not encountered any floods like had been seen in many parts of the country. 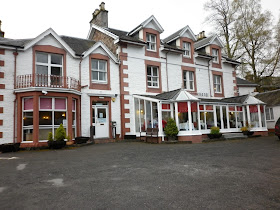 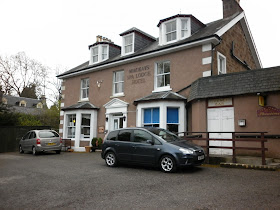 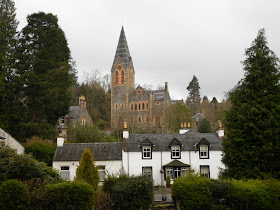 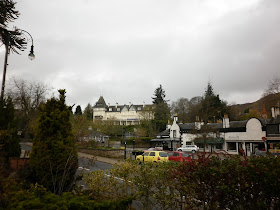 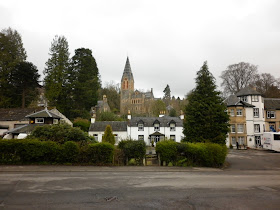 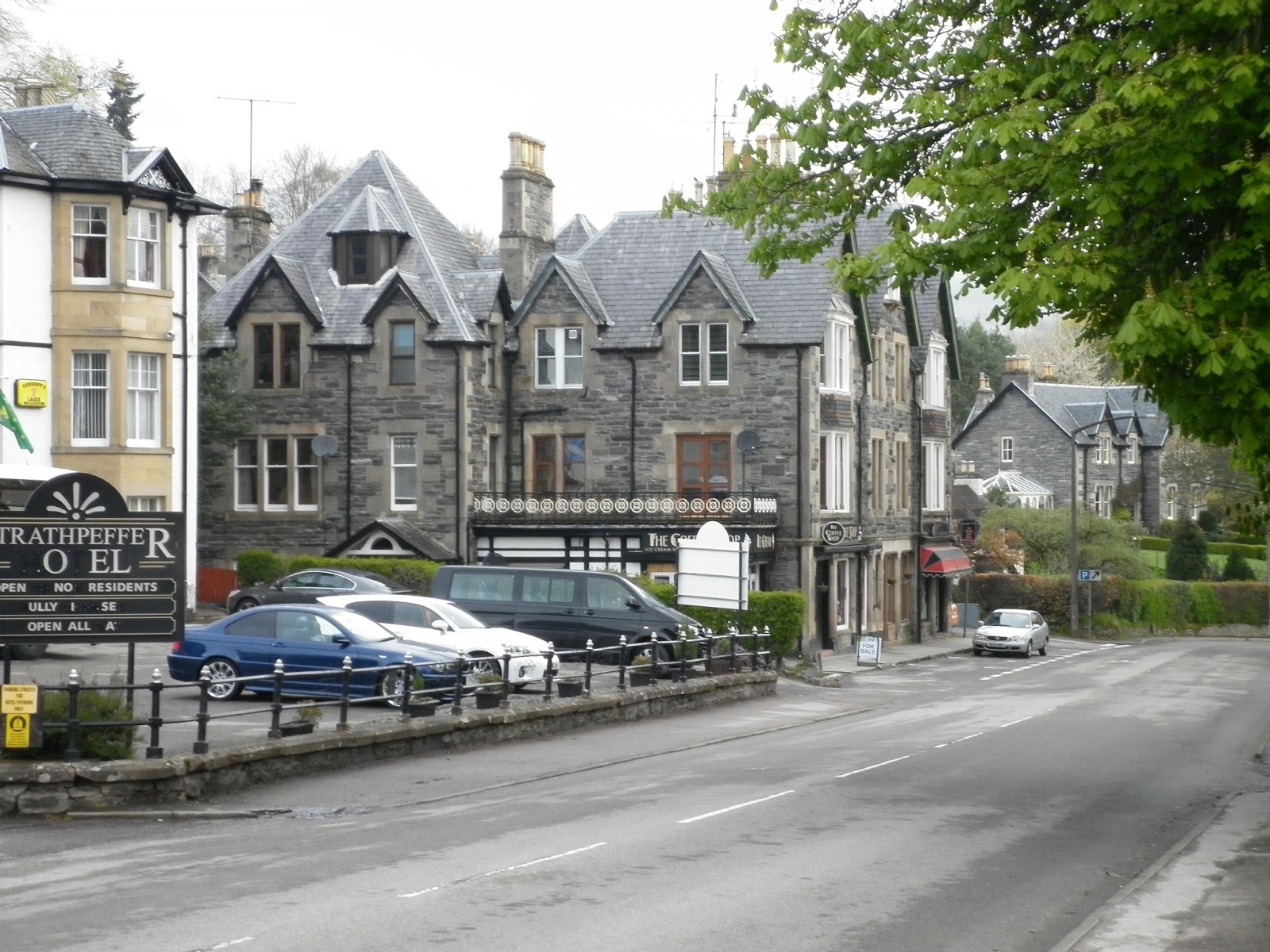 We tucked into another hearty breakfast and that included the local speciality of porridge again.  We got all the stuff together, which now pretty much dry and commenced packing it into our pannier bags now lined with the black bin liners.  We had a brief spell looking around the quaint little spa town (with me inevitably photographing everything in sight - churches included) and then we were on our way again.  The first minutes were going to be easy, as we knew the was a brief spell of downhill.  We’d gone up and down it unnecessarily the night before!  We had a relatively quiet (traffic free) ride down some of the area’s smaller A roads (A834 & A862) before getting back onto the main A9 road in Dingwall.


I think our Inverness bypass route through Strathpeffer had been a successful one, it seemed like it had cut a bit off the journey, taken us away from the main roads for a while and (to Paul’s satisfaction and relief) probably avoided us crossing to fairly significant bridges over the Beauly Firth and Cromarty Firth.  Our route took us North-Easterly along the north edge of the Cromarty Firth until we swung almost directly North near Tain to cross over the Dornoch Firth.  This wasn’t too much of a drama for Paul as it was a very low level viaduct.  As we passed Tarlogie and approached the bridge across the Dornoch Firth we saw our first indication that we were headed to John O’Groats since we’d left Land’s End.  The road sign showed us that there was officially 85 miles to go until our final destination.


The next stretch of road took us past Loch Fleet, well I suppose technically over it, as it appeared to be on either side of the road.  We had a natural break and tucked into a few leftover sandwiches and snacks from the hotel room picnic we’d enjoyed the night before.  It looked like we may have to do a bit of climbing just up the road over something called ‘The Mound’, but the road actually didn’t rise up too much here and took us along the side of it. 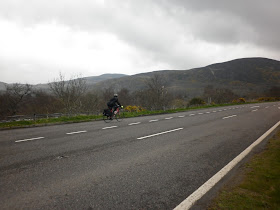 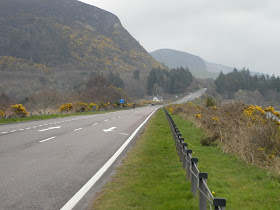 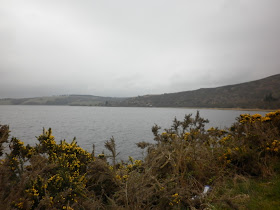 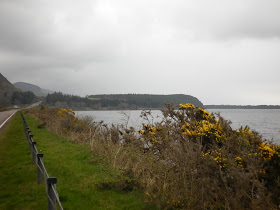 The weather remained mainly dry, but we did see a few showers and needed our raincoats.  However, there was nothing too heavy and we just carried on.  Compared to the rest of Scotland, this was the least picturesque, but it did have its own charm.  There was a lot of agriculture, so to some extent it was too dissimilar to being at home.  We pushed along the A9 with the rest of the day-to-day traffic on the region’s main thoroughfare.  It did get quite busy at times, but we though it best to stay on the main routes.  I’m not sure what options we’d have had otherwise, to be honest.  I remember seeing Dunrobin Castle on our journey between Golspie and Brora, but unfortunately I couldn’t get near enough to photograph it without pulling off the main road and investigating.  My view was almost always obscured by the surrounding woodland.  I noted it down as another one of those places to visit in the future on another trip or holiday and carried on riding.  There was still quite a long way to go to get to the end of the journey, so time wouldn’t permit too many stops.  We discussed the upcoming places and decided to have a stop in the next town (Brora) to have  brief rest and pick up any necessary supplies. 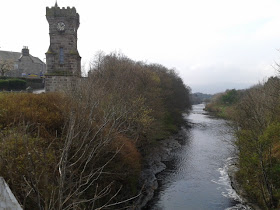 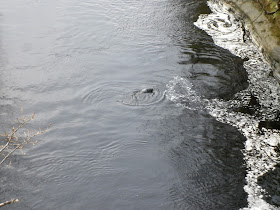 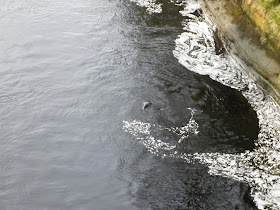 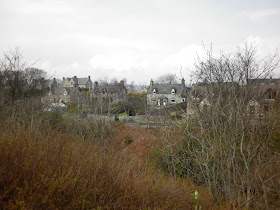 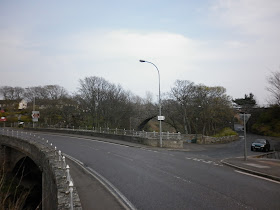 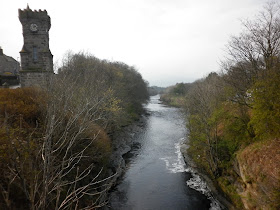 While Paul stocked up (probably more Mars bars and Shortbread) I had a look around and photographed the Memorial Clock Tower in Brora and the River Brora.  We regrouped and Paul headed off again.  I decided to linger for a few more minute and see if there was anything else worth photographing.  I sat on the road bridge over the River Brora for a few minutes until I notices something bobbing in the water below.  There was quite a large gap between each occurrence, but something was coming up for air.  Initially, I thought it was an otter, but when I finally got to see it properly (albeit just the head) I realised that it was a grey seal.  Now there was something you didn’t see every day, well maybe you did in Brora, but certainly not in the River Ribble in Preston!  I ended up hanging around for ages, as the large water mammal could hold it’s breath for ages.  I realised that I wasn’t got to get any better shots of the animal, so I mounted the bike and head of to catch Paul, who now must have been quite some way ahead.
I did eventually catch up with Paul, but this time he was beginning to wonder where I was, I think I probably managed to catch him up on the small climb in towards Helmsdale.  We had a brief comfort break and discussed whether it was worth stopping for a proper meal, we were both fairly cold and tired and probably could have done with something substantial.  We were also now starting to calculate whether we’d just ride on to Wick, the location of our final hotel, or whether we’d go all the way to John O’Groats today.  We tried to spot somewhere to eat in Helmsdale, but didn’t manage to decide on anything, this mean that it was probably going to be Wick before we had another opportunity.

After Golspie, Brora and Helmsdale the A9 became evermore undulating and closely followed the North Sea Shore line.  The climb out of Helmsdale was the most significant one of the day, at 750 feet over 2 miles that took me over thirty minutes to climb with my tired legs and heavy luggage. Unfortunately, this meant we were picking up a relatively strong headwind for most of the way.  The shoreline was quite rocky and covered in Gorse in many places.  Indeed, ironically we hadn’t really seen ant gorse (well at least not noticed it) since our time in Cornwall the previous week.  It seemed to funny to be starting and ending the journey with a similar landscape and flora.  To be fair, there was an awful lot more of the yellow flowered plant up here, and my eyes watered and my nose ran for a few hours.  I’m not a hay fever sufferer, but there was just so much gorse, if it was emitting pollen, there must have been tons of the stuff in the air. 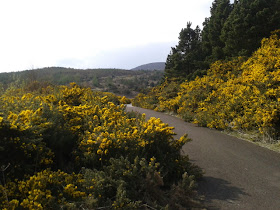 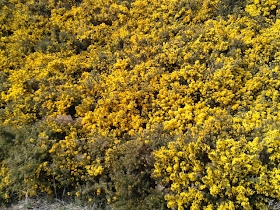 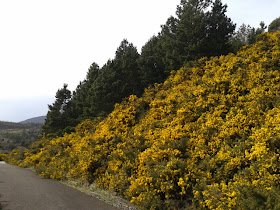 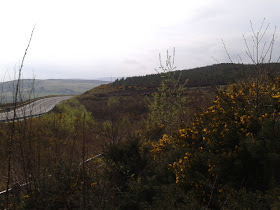 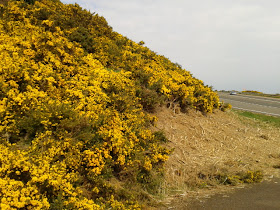 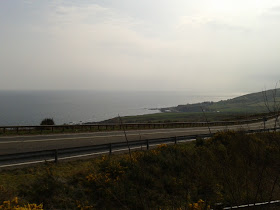 It had been quite bright whilst we rode past the gorse, but now it was starting to get dull, and the headwind (whilst not strong) just seemed relentless.  The next few hours were a drag, and personally I was tired and just wanted the day to be over.  It was going to be a long one.  We’d come to the conclusion that we’d be better doing the 35 miles from Wick to John O’Groats and back in the evening rather than having to get up and kitted out for cycling for such a short trip the following morning.  Having come to this conclusion, we should have probably had the stop in Helmshore, but we ploughed on and we really ready for it in Wick.  We decided to stop at a local chip shop in wick and get a power up before the end.  Paul opted for the (battered) Haggis and Chips again, but as much as I liked this meal I wasn’t sure about cycling on it.  I opted for a lighter Chip Butty instead.


There is very little to see on that final bit of the journey up to the End of the Earth and the fading light made it all the more bleak.  I’m sure it’s nice up there on a nice day, but in the (semi) dark, wind and rain, it’s not the greatest of spectacles.  We continued up what was now the A99, as we’d left the A9 between Helmsdale and Wick.  And mileage checks suggested we were within the last ten miles.  We could soon see the village around John O’Groats in the distance, but we’d need to go a bit further than that to get to the official markers.  The journey became more pleasant again, despite the conditions, as we realised that we were soon to accomplish what we set out to do ten days before.  We actually started to enjoy the last few miles even though it was still hard.  On reflection, I would have been better kitted out for night riding, if I’d have known we were going to do this before I left Preston.  I had no lights proper, just the hi-viz raincoat and a number of flashing LED reflective armbands.  There was very little traffic, but I would have preferred to be a lot more visible.


We finished basking in our glory and decided we better get going before the cold set in and to ensure that everything was OK with the hotel reservation in Wick.  The journey back to Wick was much easier and with the tailwind we managed it in record time.  Seventeen miles in an hour with the luggage was unusually fast for us, but we were on a bit of a high and keen to get back to civilisation.

Fortunately everything was OK at the hotel and we checked in OK, although it was well after 10pm by now.  A porter found us a suitable indoor location, down one of the corridors, to park the bikes and we went to remove the layers of lycra for the very last time.  As it was now pretty late we’d run out of dining options.  Paul wasn’t too bad off the back of his haggis and chips, but I needed to eat again.   The hotel had stopped serving meals and there wasn’t too much on offer now in Wick.  I think there was a curry hose open, but Paul didn’t fancy it.  We went back to the Hotel and the night porter kindly offered to rustle up some sandwiches for me.  We had a couple of quite celebratory drinks and relaxed in the knowledge that all our pedalling was done.